Legend of the One cover process

I have painted the cover for Elena Kasyan's ☞ The Legend of the One, and it is published! 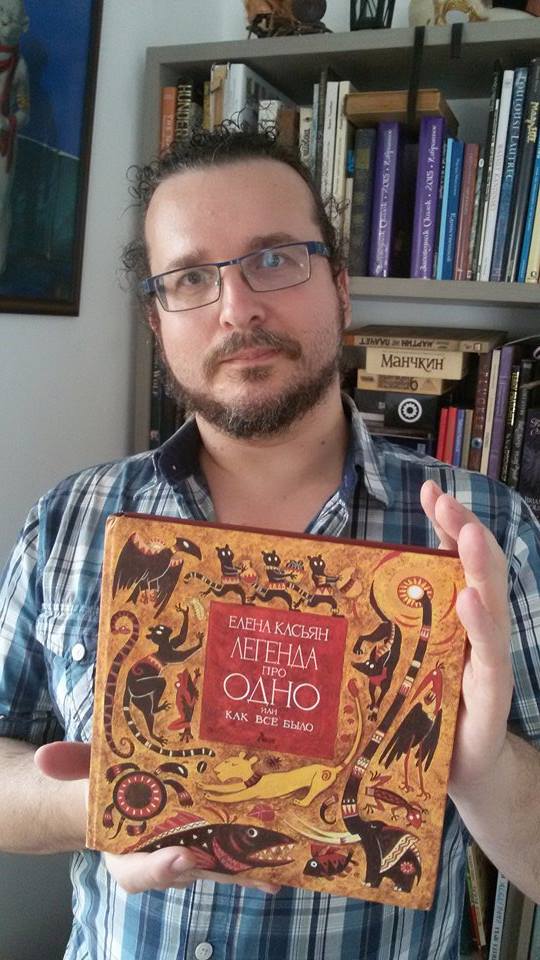 I have also painted both endpapers, and also did the typesetting, assembly and most of preprint. 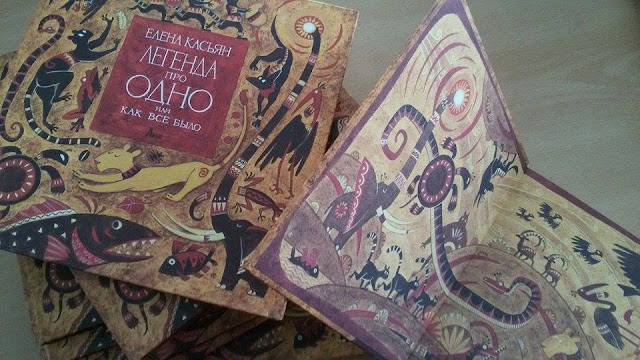 This project was different from my usual work, because I had to match the style of the primary illustrator, Tatiana Papusheva ☞, who did the interior illustrations.;

Tanya and Ilya Yudovsky ☞ came up with these lemur/bear characters, which also had to be matched. The stories themselves are a kind of fantastic cosmogony: short creation myths featuring both the people, the gods, and the spirit animals. Each story was set on its own spread, with the opposite page filled with illustration:

I started out by sketching the animals in a style inspired by Africa: 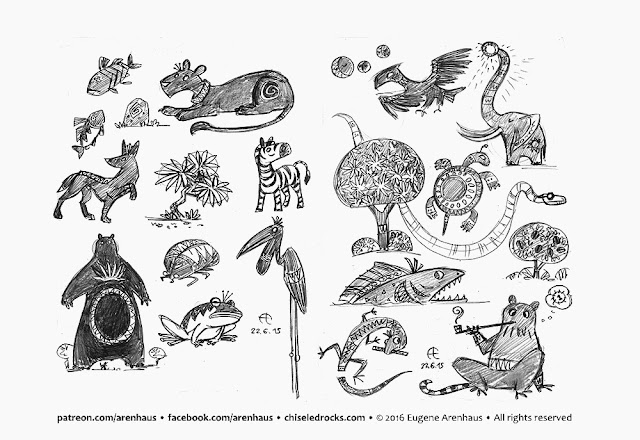 You might notice that nearly everything in this sketch ended up used in the finished cover / endpapers nearly without modification - with the exception of the poor little zebra who stood out too much. The ornaments had been taken straight from Tanya's designs, and the little "crowns" on the spirit animals were a lucky hunch that appeared right at the beginning.

Designing the people to match Tanya's lemurbears took more work. I doodled many versions, from the close imitation of Tanya's version (A) via greatly simplified (B) to very anthropomorphic (G). In the end, they looked like a mix between C and D. 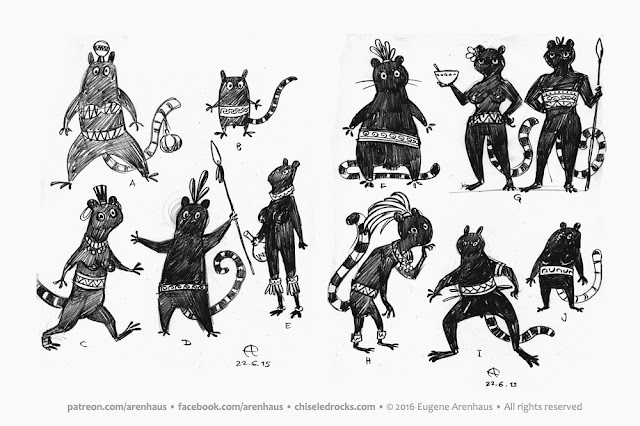 Last, I did a color test. For the endpapers, I was aiming from the very conception for rough, sandstone-like texture, and the limited palette of neolithic petroglyphs. About the only colors used are white, black, and two ochres - red and yellow. This test solidified the elephant/sun motif, and introduced an actual lemur who might be the ancestral species of these people. The picture was not meant for use, but ended up on the back cover of the book.

Then there were the composition sketches. The cover was easy, but the endpapers went through multiple revisions, tightening and re-balancing everything. First, though, I had worked through the book and compiled a list of characters and their relationships and quirks: 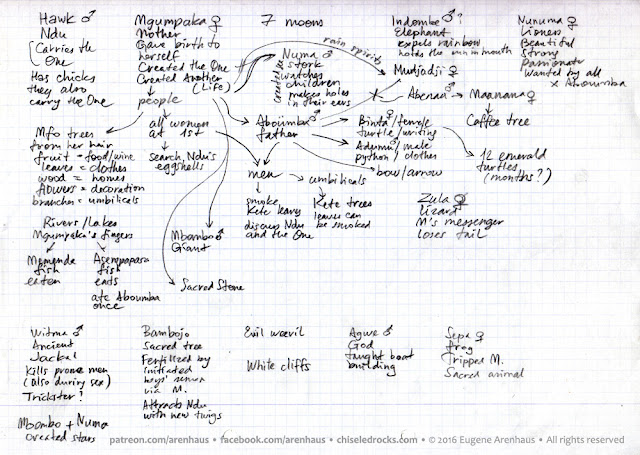 Yes, it is that complicated.

I wanted the cover to have a sort of mythological look, so I decided on a mosaic of little figures on textured background, suggestive of a cave painting. Apart of a quick layout test to decide on centered vs one-sided placement of the title, it was pretty straightforward to sketch. The organizing idea was a sort of swirling motion around the title plaque, from the lemur to the walkers down the elephant's trunk. 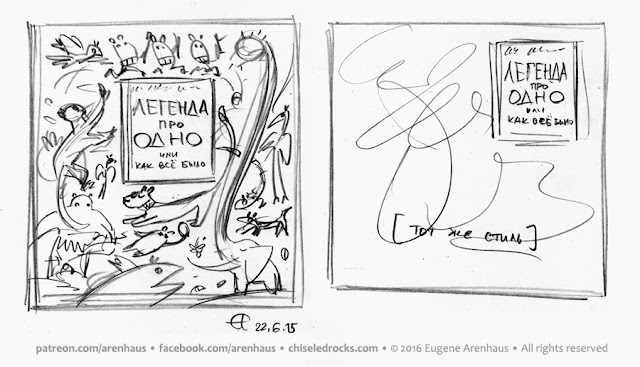 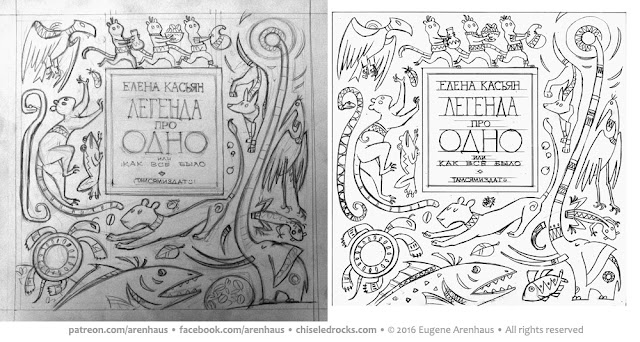 For the endpapers, I decided to make similar mosaics, but separate the spirit animals from the people and their gods. I did a test composition of the front paper, then another, but the mosaic was boring. 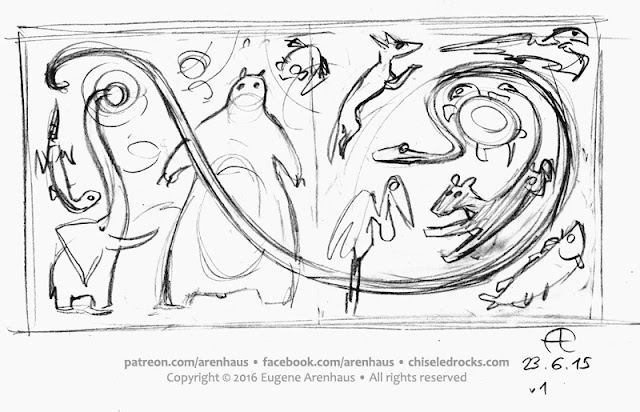 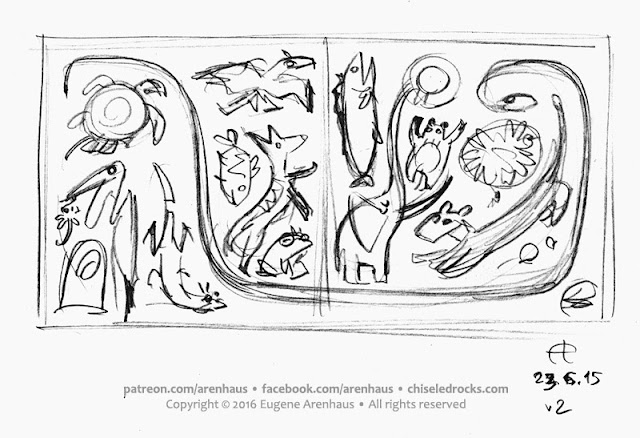 I tried to make a more spacious composition with animals in a landscape. I took a bigger page (125% of print size), and made a sketch. 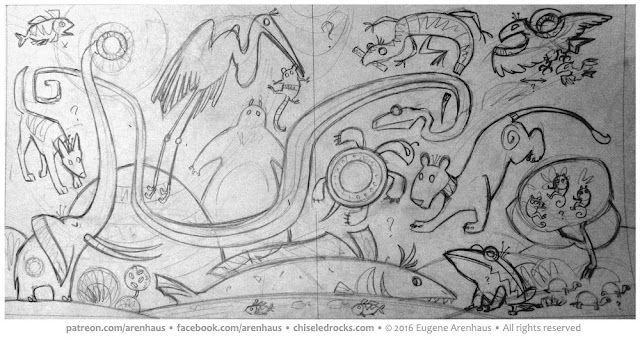 I liked this approach better, but it still turned out too busy. Back to small sketches. 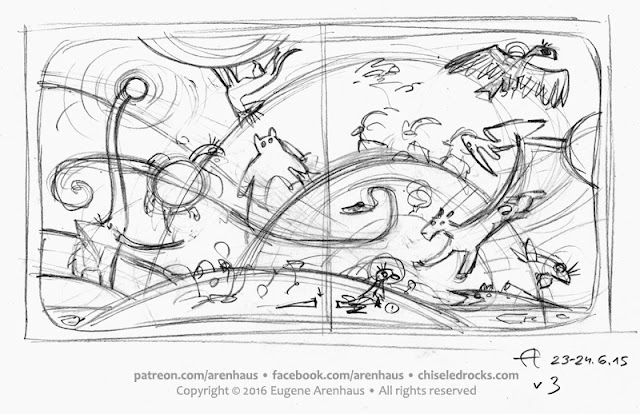 More air solved the problem. Also, the frame and the parts violating up and down both suggest a pocket universe: I liked this idea a lot. Switch to big size again, sketch, then refine on another page. 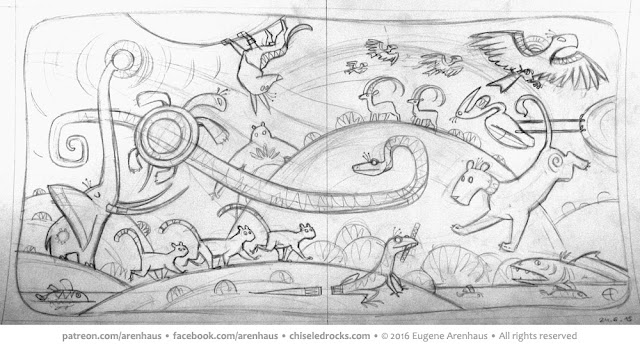 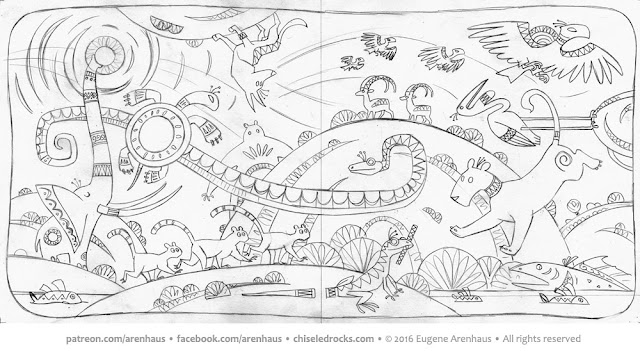 With the new concept for the endpapers of showing not just the creatures, but also the world, the back paper was much easier to figure out. I used similar undulating lines, framed the composition with big figures of the the two main deities, and just filled the rest with little people going about their business. It worked on the first attempt. 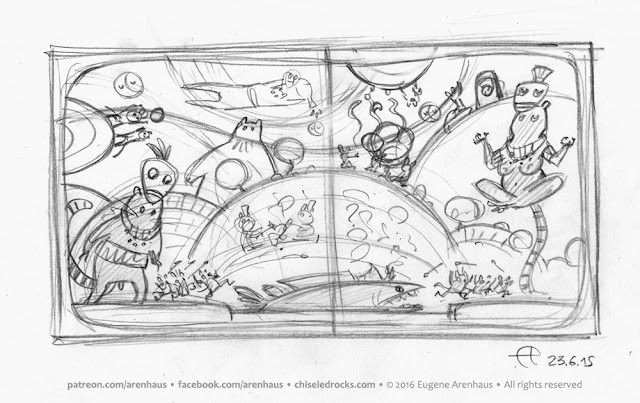 Some of the little people I had jotted down - the worshipper, two women reaching for the moon egg, the women  frying some fish, the men discussing philosophy under a tree, the hunters around the big fish - but the rest are all amorphous at this point, designated by scribbles. There is even a big question mark right in the middle. 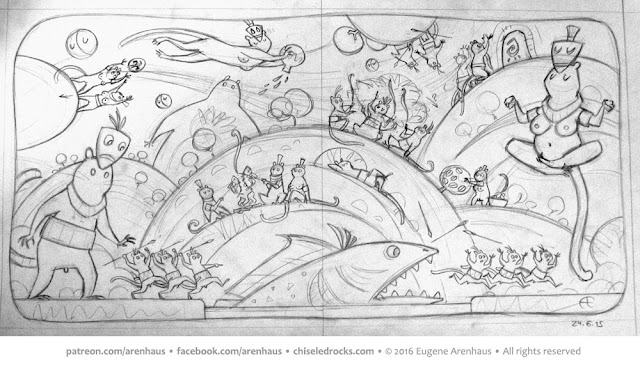 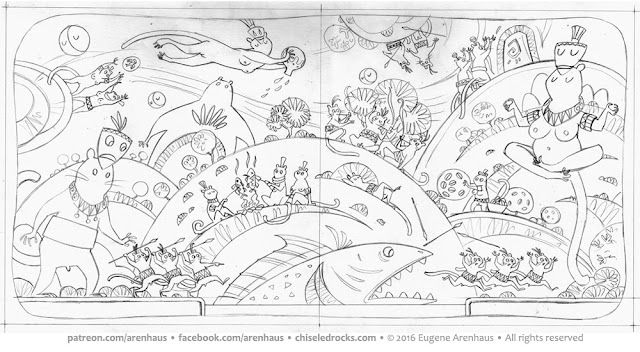 Time for color. Unlike the endpapers, I had no preconception of what would work for the cover, so I tried many different combinations. 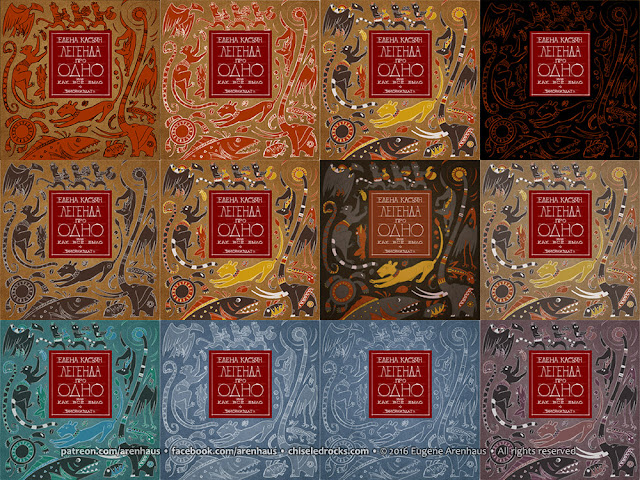 The dark background is interesting, but in the end I decided that the same Neolithic palette of white-yellow-red-black worked best for the cover as well.

I also made the title by hand, in the tradition of 1950s hand-drawn Russian book titles, since there were no stock fonts to match the type design. It was scanned and used as a color mask. 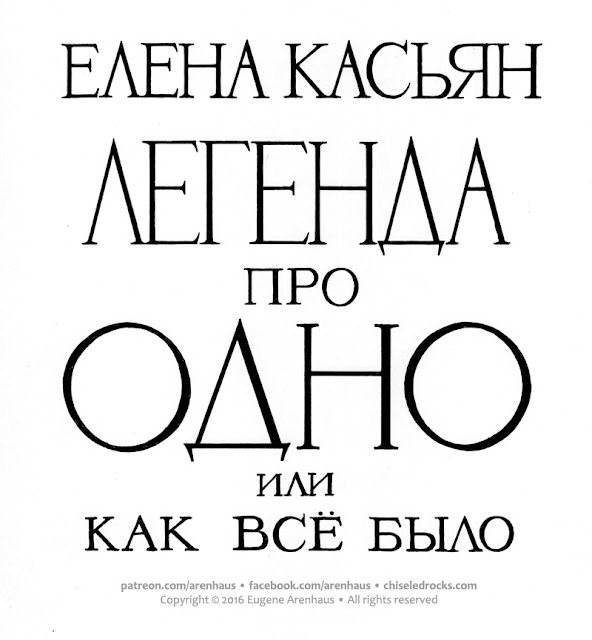 The rest was a matter of transferring the final drawings to watercolor paper and painting them with brush and sponge. These three paintings killed almost an entire cake of yellow ochre, because the tube version of the pigment that I had wasn't bright enough.

And here they are! 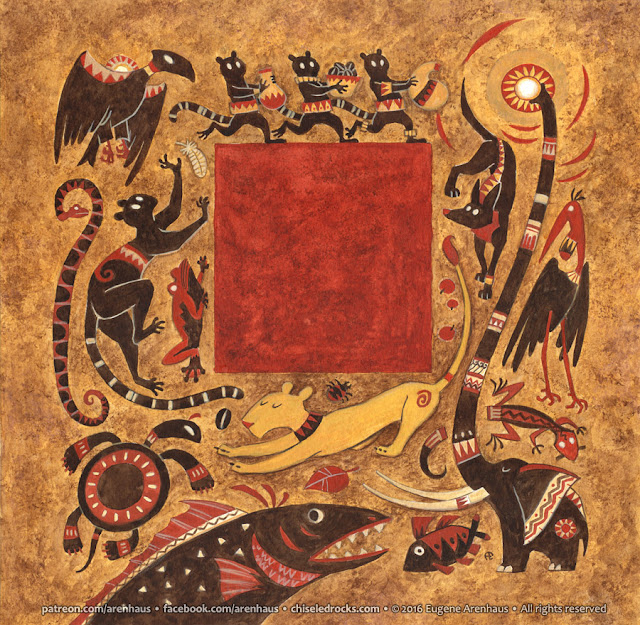 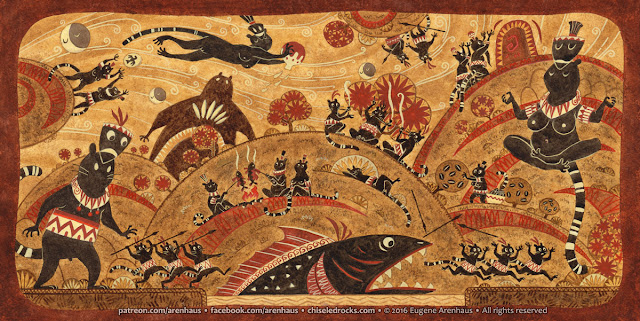 Posted by Eugene Arenhaus at 2:36 AM

Eugene Arenhaus
I paint pictures, invent creatures and lead people away down the rabbit holes. My paintings are found in unlikely places like USA, UK, Australia, Russia, Bulgaria, Israel, Middle Earth and who knows where else. I have lots of eclectic skills and interests, and I use this place to post things that I think are worth talking about but which don't go on my main web site. Which means a larger variety of topics other than art and illustration. Also, violets are blue. Wait. They are violet, not blue.