Look at the face of this guy. Would you believe that this is the face of someone who wants to kill you, and everybody you know? 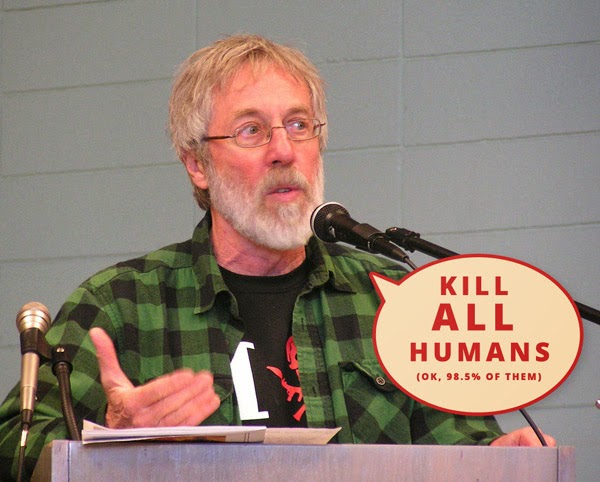 You are looking at the professor of philosophy, John Zerzan. He is an “anarcho-primitivist”. That means he wants the humanity to return to pre-agricultural, forager lifestyle, claiming that it would solve all problems that we are facing and make us happier.

If only we got rid of this huge mistake called civilization, Zerzan says, everything would become just great. After all, Zerzan says in an interview, “early humans had a workable, non-destructive approach” that kept them “intimate with nature”.

Oh, you are such a hoot, Professor. Tell all that to those early human guys who hunted the megafauna into extinction, burnt forests into desertification, and had general clean fun like epidemics, cannibalism and death before thirty-five — and kept inventing things until they (us) became what we are.


Zerzan not only decries technology and science for being removed from the reality. He even laments the invention of language, which he calls “a mediation between ourselves and reality”. He says:

“We lived more directly, immediately before these dimensions arrived, fairly recently. Freud, the arch-rationalist, thought that we once communicated telepathically.”

Telepathically. Right. Communing with the spirits of happy little trees. And he calls science removed from reality! I am a little surprized that Zerzan did not bring up Atlantis, Lemuria and ancient alien visitors from Nibiru, but perhaps these imply too much technology for his taste.


The idiocy of this philosophy is so thick you need an axe to cut it. How comes Zerzan does not realize that the early humans did have a "workable approach" — it is called technology, which they improved from sticks and stones to bows and spears to agriculture to industrial manufacturing to information age? The approach is the same, and bettered along the way — and he wants to throw all that away for the tired, ages-old Rousseauist fallacy of the “noble savage”.

It does not come to Zerzan's mind that even if you could strip all the technology from the whole of humanity, how are you going to control the neo-primitives' technology development and prevent them from inventing the whole civilization thing all over again?

How is he going to make everyone left on the planet to forget that they used to have machines, powered flight, firearms, libraries, long-distance communications, infrastructure, medicine, law, and keep them content with the subsistence living at the mercy of elements? How is he going to remove all traces of technology from Earth? How is he going to control the warlords and feudal chiefs that will spring up the next day he gets his Rousseauist dream? Does he think he is going to use bows and arrows to stop the reinvention of steel and firearms — or is he planning to keep a contingent of military-industrial caste, armed with the modern technology to keep everyone else in the stone age?

The fact is, the longer you think about this silly fantasy, the less silly it seems and the more grim and terrifying it becomes.

Because if you and your followers do it voluntarily, you will end up being a hypocritical colony of hippies depending on the civilization they pretend to not exist. But if you try to do it on the planetary scale, you are talking either about installing a monstrously oppressive regime over the whole world to keep your primitive fantasy from evolving civilization again, or killing nearly all humans on Earth.

In fact, you cannot even have the oppressive regime without killing nearly all humans on Earth. If you go back to the hunter-gatherer level, the planet can sustain about one hundred million flea-bitten Noble Savages. The other seven billion must go to make this dream of Zerzan's happen. Who is going to do the culling, Professor?

This is beyond ghoulish. Yet there he is, blithely preaching his little post-apocalyptic paradise, sitting on an imaginary mountain of seven billion dead people, in an air-conditioned room, wearing correcting eyeglasses, with tooth decay in check by his dentist, wearing machine-made clothing — and calling for civilization's suicide over the Internet. (Before you find this ironic: he calls the Internet "a necessary evil", to be used to dismantle the civilization. And then got rid of with disgust, I imagine, or perhaps left in the hands of the select few who will ensure that the "mistake of agriculture" never happens again.)

But he is a dangerous waste of intellect not only for this reason. He professes unfeasible plans for us to become throwbacks, stop all evolution and sit there waiting for the nearest asteroid strike to wipe us out — when he could have studied the actual human group psychology and invent ways to make the existing society as happy and sustainable as his imaginary Noble Savages are supposed to be. One group at a time, or, with luck, as an influential thinker swaying the culture to higher functioning. But no, he sits there advocating insane plans to return to savagery, using for his proselytizing the very technology he decries. I have to wonder: if language, as he says, is the source of the whole detachment from mother nature thing, then wouldn't it be best to abandon it with all technology, and become apes again? Why doesn't he advocate a return to animal state, rather than savage state? Perhaps he thinks that if we do, telepathy will kick in?

Oh, I forgot. He is a philosopher. His job description forbids looking at the real world.
Posted by Eugene Arenhaus at 2:12 PM

Eugene Arenhaus
I paint pictures, invent creatures and lead people away down the rabbit holes. My paintings are found in unlikely places like USA, UK, Australia, Russia, Bulgaria, Israel, Middle Earth and who knows where else. I have lots of eclectic skills and interests, and I use this place to post things that I think are worth talking about but which don't go on my main web site. Which means a larger variety of topics other than art and illustration. Also, violets are blue. Wait. They are violet, not blue.